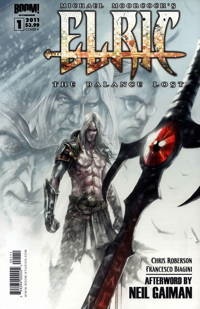 Out of the blue, I started doing a new podcast for Derek Coward‘s Reader Feed called Pull Box Picks. I decided I wanted to do a review show of short episodes I could record in my car, and Derek has generously built such a platform for podcasters. It’s a meta-feed made up of various focussed sub-shows. As far as I can tell, mine is now the only one on there that isn’t focussed on specific characters or series. I might have broken the premise but oh well. I flat out love a few of the shows in that feed such as Ronin Rabbit about Usagi Yojimbo, Devil in Your Ears about Grendel, and the Love and Rockets show.

I’ll put the first episode here in my feed as well. On it I give my review of the new series from Boom Studios Elric: The Balance Lost. I’m torn whether to do it with all episodes or just this one. I’ll let the EGC subscribers tell me. The default is just this one, but if popular sentiment runs the other way I have no problem putting them all in.

I had so much fun doing the first episode. I recently received my newly purchased Zoom H2 Recorder. I spent the drive into work profiling how different settings sounded, and on the drive home I recorded this show. I did another one today that I’ll upload soon. I’ve been highly non-prolific with the EGC podcast for years now, and the baby doesn’t help anything. The fact that I haven’t gotten around to recording my seventh anniversary show is telling. Recording a five minute show about comic books, doing minimal editing and uploading it to Derek feels like podcasting heaven to me. Perhaps this is how I get my groove back.

One thought on “My New Podcast – Pull Box Picks”