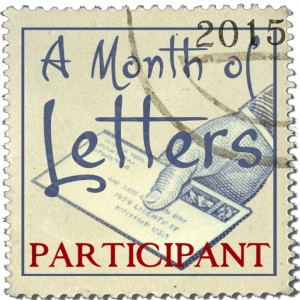 I just realized with horror that we are already into February. The weekend with two child’s birthday parties – one for my own – left me not thinking too hard about the calendar. That means that if I’m going to do The Month of Letters Challenge I’m already two days behind.

I’ve done it twice and then didn’t do it last year for much the same reason. Somewhere in the middle of February 2014 I noticed that I had never started, and was far enough behind I didn’t pursue it. It is great fun and a great way to connect to friends and family. There is something nice about receiving a nice piece of mail and nice about sending it. Much in the way that I am interested in zines and minicomics because they are somatic and physical, I am interested in LetterMo. So much of my life is digital and on the computer that now and then it is pleasurable to return to the tactile with things like the participant stickers you can affix to your mail.

So, I’m starting at a deficit but I’m doing it anyway. The plan is send mail for 23 days (the shortest month anyway with a mail holiday in the middle.) I’ll do that, and either make up the time on Sundays or go a bit into March. The specifics don’t matter, just doing something does.

I’m in. Who else is with me? A Month of Letters is on Google+ and Facebook, so dive right in.