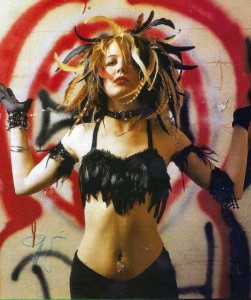 I just listened to the episode of the Rock and Roll Geek Show where he interviewed Inger Lorre about the rise and fall of her band the Nymphs. He got to the end and said “I’m going to play one more song, I don’t even know what it is.” Following that, I heard the opening notes of Black Flag’s “Slip It In”, the version Henry Rollins recorded for Rise Above, the West Memphis Three fundraising album. Inger sang the female voice on that version.

I haven’t heard this song in a long time, but from the first few notes, my pulse quickened and I got excited. My body had a visceral reaction even before my mind had registered what the song was. I must have listened to the song easily 500 times when I was in college, mostly the live version on my second-hand Walkman. I’m at a similar weight to back then, and my body is as much like it was then as it has been in decades. I instantly felt like a dumb 20 year old with endless pools of free floating aggression and anger, looking for anywhere to go. This music, slam dancing at the Metroplex, doing ridiculous feats of physical stupidity, that is where it went. I’m glad I survived all that in one piece.

It only took a few seconds of an unfamiliar version of a familiar song to bring it back. Here’s to surviving your youth.