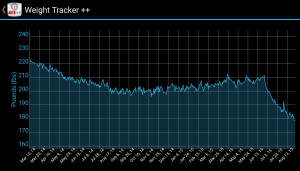 I’ve now been on the Eat to Live plan for two months and a day. Total tally: I have lost 33 pounds so far. I started at 211 pounds in late June, I weighed 178 pounds this morning. At the 5 week mark when the plan loosened up and allowed me to eat some meat and other things prohibited in the first part, I weighed 185 pounds. So, I lost 26 pounds the first five weeks, and 7 the next three weeks. I can live with that. One of the questions for me would be whether I would continue to lose weight, stall out or even gain weight when the plan changed. That I am still losing is plenty good for me, whatever rate it is at.

If you look at the chart, it is pretty easy to identify my birthday. For one whole day I allowed myself a bacchanalia. The next morning I weighed 7 pounds more than the previous. That isn’t to say I put on 7 pounds of fat. I pigged out but didn’t eat 20,000 calories that day (nor could my body actually store that much in a single day.) I’m pretty sure most of that weight is the result of allowing myself lots of salty foods that I would normally avoid or eat in moderation. The Crafty Rooster trip with lots of bacon-cheese chips and french fries, beers and burger is not a meal I eat as often as I used to but once in a while is fine.

Right before my birthday, I went in for a routine checkup which included the standard blood work panel for a guy of my age. For every panel of my life, my total cholesterol has been low (usually low outside the normal range.) However, my HDL cholesterol is usually even lower than that, and my ratio is always too high. This time, for the first time ever my ratio was in range. This seems like a wild success to me. My blood pressure is lower than when I started, my weight is back in the range of a 24 year low for me. By all the empirical data I have, everything about this plan has been a rousing success.

Just this week Derek Colanduno of Skepticality posted a link to a blog article refuting Eat to Live. Derek himself called the diet “woo”, and the article by Adele Hite seems to want to “blow the lid” off this plan. In paragraph one she makes a big point that she’s never read the book. Then she rejects the claim that 100 calories of broccoli has more protein than 100 calories of steak. She points out that he cited older sources so using the more up to date references means that broccoli only has 75% as much, not more. OK, fair enough. However, the main point he was making is that eating less meat (no meat for six weeks, modest amounts after) will not mean that you consume catastrophically low amounts of protein.

From there, she goes on about how you can’t get all the amino acids you need just from broccoli. This is a valiant slaying of a straw man, refuting a point exactly no one makes. In the book (the one she has never read) Fuhrman does not advocate eating solely broccoli. He advocates eating a variety of leafy greens, cruciferous vegetables, tomatoes, carrots, mushrooms, beans, raw unsalted nuts, avocados and other foods. This is specifically to make sure you get all the nutrients that your body needs – amino acids, vitamins, minerals, etc. I think if the skeptic community wants to take on this eating regimen as “woo” based on a misunderstanding of the recommendation by people who haven’t read the book, that’s a bad idea. When I watch people I respect with a knee-jerk condemnation of something on a really shaky basis, it weakens the brand and means I am going to be slower to believe the next alarm.

If you think that recommending eating mostly salad and vegetables while limiting the amount of sweets, dairy, grains and meat that you eat is a bizarre fad diet, I don’t know what to tell you. Is there anyone who finds this a controversial weight loss plan? I don’t have a wealth of data points on this, but I don’t know yet of anyone who has bounced off of this plan or had bad results. I know that I am now 7 pounds under what I considered my best case outcome and still losing. I couldn’t be happier.

8 thoughts on “Two Months on Eat To Live”