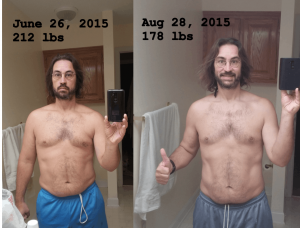 Here is some photographic example of what I’ve been talking about with Eat To Live. The left picture was taken the day I started, the one on the right this week. There is about a 34 pound difference between the two. I note that I don’t look that radically different, but I’m more generally concave in the before and convex in the after. Although “After” is a misnomer because I’m not stopping anytime soon. “Late Middle” might be a better way to refer to it.

Also, I was not deliberately making a miserable face in the first picture. I am actually smiling in every photo I took except the first day. This isn’t some kind of late night commercial thing, where I am trying to make the before as putzlike as possible. It just worked out that way.

20 thoughts on “Eat to Live Before and After Pictures”