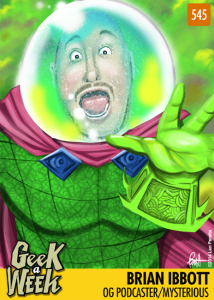 Dear Len Peralta and Brian Ibbot, re your discussion on Geek A Week about long-running podcats:

Yesterday I got an email from Derek Coward, pointing me to this pair of articles: one about Podshow changing their name to Mevio, and another about how Mevio was focusing on professionally produced content, as opposed to that shitty stuff that they’ve focused on for the last three years, I suppose.
I’ve actually let up on Podshow a lot in the last few years. Their biggest positive is that they have done positive things for my friends. They allowed Drew Domkus and Michael Butler and others to quit day jobs that they weren’t digging and they’ve allowed a lot of people that I like to make some money podcasting. I’ve had my doubts about them and given them shit along the way but I decided that unless and until they really screwed a friend of mine I would give them a break.
Still, I’ve always been queasy about the company and particularly about Ron Bloom. Back when I used to listen to the Daily Source Code and they did that long episode that was Curry and Bloom discussing their views and goals for their newly forming and at the time still unnamed company. After listening to that long painful show, I decided that if I ever found myself shaking Bloom’s hand, I’d count my rings and fingers afterwards.

When I read the story, there is one quote that really stands out to me.

â€œWe have never believed in user-generated content as a business, or even as a sustainable entertainment offering,â€ said Ron Bloom, Co-founder and Chief Executive Officer, MEVIO.

That statement puts the basics of the Podshow/Mevio philosophy into a funny state. Now the question is whether Bloom was lying three years ago or is he lying now? It’s really strange to claim that Podshow never believed in user-generated content as a business because, like, we were there. This seems like a form of brass balled, straight in the face prevarication that would be a stretch even for the Bush administration.

I remember the weird feeling I got in my stomach when I went to the first Podcast Expo in 2005 and saw the t-shirts Podshow was giving away. Of all the things they could have pumped, the important aspect to them was about podcasters “quitting their day jobs.” It was a blatant appeal to the wannabes who hoped to become Dawn and Drew. “Come join up with us, and soon you’ll be doing this for a living too!” As it turns out, that was never something Podshow “believed in as a business, or even as a sustainable entertainment offering.” Is there any possible reconciliation of that statement and of the pitch Podshow has used to recruit individual podcasters all through its history? I’ve looked for one and haven’t been able to find it.

I couldn’t remember the exact wording of those shirts, so I put out an appeal on Twitter for someone to send me a photo of themselves wearing the shirt. Slightly vindicating Twitter for me, I woke up this morning to the attached photos of Mr Jamie Nelson in said shirt. If I’m understand his email correctly, he was in fact already wearing it to sleep in when he saw my tweet. Now seriously, look at those shirts. I’m not treating the shirts as the definitive mission statement of the company, but they are a clear indicator of the way Podshow represented themselves to the amateur podcaster. Dudes, you were never part of the business plan, and you were never something the company believed in. How does that make you feel about the last three years of loyalty to the company. It puts me in mind of a quote Patrick Nielsen Hayden frequently uses: “Just because you are on their side doesn’t mean they are on your side.”

So, to clarify my stance: I wish no one in particular ill will. I’m not rooting for anyone’s business to fail, and I don’t want to see any of my friends out of work or experiencing any hardships. I don’t blame any of the Pod* companies for changing their names. When I was naming AmigoFish, the one rule I had is that there would be no “pod” anywhere in the name so I was maybe ahead of that curve. Other than this post, I’m resuming my general apathy towards Mevio. I listen to very few of their shows, and those that I do listen to will continue whether or not the company does. I do think if you are a Podshow podcaster you should pay attention to this. The company doesn’t believe in you, so maybe you should reciprocate by failing to believe in them and acting accordingly.

As someone who was doing a show when you could count the other podcasters on your fingers and listen to every other one produced every day, I can make one definitive statement about the medium. It was all a lot more fun when no one was making any money and only worried about putting out fun shows that mattered to them.