I’m a fan of Paul F. Tompkins and have been anxiously awaiting more episodes of the Pod F. Tompkast for a year and a half. I’ve just started watching his series Speakeasy on YouTube. This episode has Gary Cole and is pretty phenomenal. I like that the conceit of the series is that the two of them are sitting at a bar enjoying cocktails while they talk. Instead of Dinner For Five, it’s Drinks for Two.

And while I am talking PFT, just let me say there is no better choice than him for the Doctor Strange movie. Ever since Jared Axelrod photoshopped the picture, I’ve been in. Joaquin Phoenix? No, Tompkins all the way! Take that to the bank! 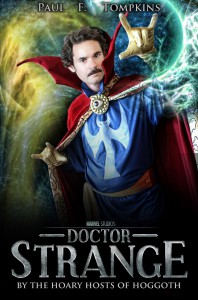