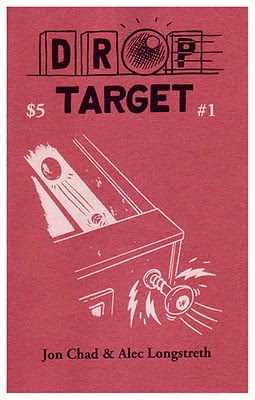 I’m a fan of cartoonist Alec Longstreth. I read his blog, buy his comics, have met him at Heroescon several times and even interviewed him once. I was pleased a few months ago when I saw him blog a reference that he was working with fellow cartoonist Jon Chad on a good old fashioned paper zine devoted to pinball called Drop Target. It combines three of my interests in a nice package – comics, pinball and zine culture. I’ve referenced multiple times on this blog my desire to be more involved with reading and making paper zines as an antidote to the ephemerality of internet culture. This seemed like a great beachhead from which to start that campaign.

I ordered issue #1 from their online store, paid via Paypal and received my copy about a week later. It is a nice package with multiple text features and a long memoir comic about hunting for and playing pinball machines. The text includes some basics of the parts and mechanics of a pinball machine, an interview with the former editors of Multiball magazine, reviews of specific machines and venues with machines. All told, it was a fun and diverting way to spend an hour or so and a great melding of several of my interests. If you like comics, the memoir is satisfying as comics. If you enjoy pinball, the pinball content is informative and enjoyable on that level. If handmade zines are your thing, this is a very good example of that form.

I like zines for the same reason I’ve been a proponent of podcasting and blogging. It rewrites the economic equation by making it so cheap to publish that one can tackle a niche topic and really go for it. This is a great example of that ethos. The second issue is listed as coming in Spring 2011 and I’m looking forward to it. I’m going to pursue trying to interview one or both of these guys for my podcast and I’d even be happy to contribute to their zine. This is exactly the sort of thing that has been making me happy of late. Even as I pull back from social media and the always connected digital world, I’m reconnecting with the tangible artifacts of our real world.