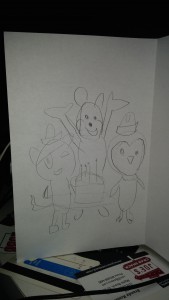 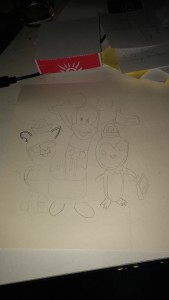 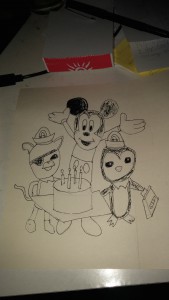 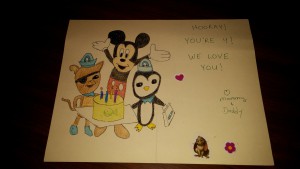 A few weeks ago, we made the last minute decision to make Punkin a birthday card with some of her current favorite characters. I’m not an artist, but I know enough about comic books to understand the process and try to emulate it.

I tried to go through the standard cycle as a layman understands it. First I did a quick thumbnail on printer paper to make sure I understood the basic composition of the thing, and more importantly how I understood the sizes of the figures relative to each other.

After that, I took a folded piece of card stock and pencilled in the figures. When I felt good about that, I inked them. After that, I erased a little of my lines and passed it off to the colorist and letterer (which was mommy.) The final product looked pretty decent, if we do say so ourselves. It was a lot of work and made for a later night than anticipated but it was probably easier than trying find a card with the right set of characters. Considering the front is a Paw Patrol character and the inside is a mix of Octonauts and Mickey Mouse, that was probably impossible.